When the Son of Man shall come in His glory, and all the holy angels with Him, then He shall sit upon the throne of His glory. And before Him shall be gathered all nations, and He shall separate them one from another, as a shepherd divides his sheep from the goats. He shall set the sheep on His right hand, but the goats on the left. Then shall the King say unto them on His right hand: Come, you blessed of My Father, inherit the Kingdom prepared for you from the foundation of the world! For I was hungry, and you gave Me meat; I was thirsty and you gave Me drink; I was a stranger and you took Me in; naked, and you clothed Me; I was sick and you visited Me; I was in prison and you came unto Me! Then shall the righteous answer Him, saying: Lord, when did we see You hungry, and fed You? Or thirsty and gave You drink? When did we see You a stranger and took You in? Or naked and clothed you? Or when did we see You sick or in prison, and came unto You?
And the King shall answer and say unto them: Verily I say unto you, inasmuch as you have done it unto one of the least of these, My brethren, you have done it unto Me. Then shall He say also unto them on the left hand: Depart from Me, you cursed, into everlasting fire, prepared for the devil and his angels: For I was hungry and you gave Me no meat; I was thirsty and you gave Me no drink; I was a stranger and you took Me not in; naked and you clothed Me not; sick and in prison, and you visited Me not! Then shall they also answer Him, saying: Lord when did we see You hungry, or athirst, or a stranger, or naked, or sick or in prison, and did not minister unto You? Then shall He answer them, saying: Verily I say unto you, inasmuch as you did it not to one of the least of these, you did it not to Me. And these shall go away into everlasting punishment, but the righteous into life eternal. (Matt 25:31-46)
If anyone teaches otherwise, and consent not to wholesome words, even the words of our Lord Messiah Yeshua and to His doctrine, which is according to righteousness, he is proud, knowing nothing, but doting about questions and strife's of words, whereof comes envy, strife, railings, evil surmising, perverse disputing of men of corrupt minds, and destitute of the truth, supposing that gain is righteous; from such withdraw yourself. But Messiah-likeness with contentment is great gain! For we brought nothing into this world and it is certain we can carry nothing out. Thus, having food and raiment let us be therewith content.
But those that want to be rich, fall into temptation and a snare, and into many foolish and hurtful lusts, which drown men in destruction and perdition. For the love of money is the root of all evil; which, while some coveted after, they have erred from the faith and pierced themselves through with many sorrows. But you, O man of Elohim, flee these things, and follow after righteousness, piety, faith, Love, patience, and meekness. Fight the good fight of faith, lay hold on eternal life, where unto you are also called and have professed a good profession before many witnesses. (1Ti 6:3-12) {cf. 1Th 4:7-12}
Recall the face of the poorest and the weakest man whom you may have seen; ask yourself if the step you contemplate is going to be of any use to him: Will he gain anything by it? Will it restore him to a control over his own life and destiny? ~ Mahatma Gandhi
Being unwanted, unloved, uncared for, forgotten by everybody; I think that is a much greater hunger, a much greater poverty than the person who has nothing to eat. We must find each other! ~ Mother Teresa
There's no higher religion than human service: To work for the common good is the highest creed! ~ Woodrow Wilson
Those who wish to make room for the Lord must find pleasure, not in private property, but in common property: Redouble your charity. For, on account of the things which each one of us possesses singly, wars exist, hatreds, discords, strife's among human beings, tumults, dissensions, scandals, sins, injustices, and murders. On what account? On account of those things which each of us possesses singly. Do we fight over the things we possess in common? We inhale this air in common with others; we all see the sun in common. Blessed therefore are those who make room for the Lord, so as not to take pleasure in private property. Let us therefore abstain from the possessions of private property, or from the love of it, if we cannot abstain from possession; and let us make room for the Lord. ~ Augustine.

Take Back the Land
In response to one of the worst epidemics of gentrification and low income housing in the United States, a small group of activists in South Florida lawfully seized control over public land, and started a desperately overdue movement. On October 23, 2006, members of Take Back The Land reclaimed publicly owned land in the Liberty City section of Miami, creating the self governed shantytown of Umoja Village. In the wake of public housing vacancies, corrupt city officials and flawed federal programs, a community found the unrelenting courage to fight back. Using minimal resources such as discarded plywood, packing pallets, and tin roofs, a collective group of activists, Umoja residents, and community supporters built temporary housing units for 53 displaced residents. In spite of police arrests, court battles, interpersonal conflicts, and the devastating fire which would reduce the village to ashes, the Umoja clan stood strong with unbridled spirits, proving the power of determination and perseverance. This book by author Max Rameau, documents the planning, development, struggles and triumphs endured by Take Back The Land activists and Umoja Village residents, and tackles the larger fundamental issues of land and power distribution in black communities.

Homeless Culture and the Media
Subtitle: How the Media Educate Audiences in their Portrayal of America's Homeless Culture! This book explores how the homeless are portrayed by the media and, consequently, how public perceptions of the homeless are shaped. By analyzing how the media informally educate their audiences, interviewing homeless people and journalists, and conducting content analysis of news stories, this research uncovers the reality that the issue of homelessness is not a media priority because it does not provide the requisite ratings boost. This study also debunks the myth that the solution to a homeless person's problem is a meal and an overnight stay, illuminating how much farther the distance to becoming a 'regular' person is. This book has received excellent reviews by researchers. Dr. Bob Gassaway, University of New Mexico states, 'it tells us about a piece of America few of us understand.' Dr. Don Douglas of Biola University concurs: 'Dr. Reynalds probes a dimension of life in modern America that is seldom addressed and begs for additional understanding.'
Outside Links:
FacingHomelessness.org ~ US Homeless Resources & Sleep Accommodations ~ The Cult Of Politics ~ Real Estate Is Almost A Ponzi Scheme ~ How/Why Poor Americans Get Exploited By Their Landlords ~ Breaking The Silence: Capitalism & Mental Illness ~ How Can You Worship w/the Homeless On Sunday & Ignore Them On Monday? ~ 7 Principles of Effective Compassion ~ America Has Unofficially Declared War On The Homeless! ~ Here's How Finland Solved Its Homelessness Problem ~ Ending Homelessness? Bullsheet! ~ Homeless: The New Growth Industry ~ Criminalizing The Homeless (PBS) ~ National Coalition For The Homeless ~ Christians Are More Likely To Say It's Poor People's Own Fault They're Poor ~ US: Homeless Die In Frigid Weather ~ FoodNotBombs.net ~ National Housing Database For The Homeless & Low Income ~ HousetheHomeless.org ~ HomelessShelterDirectory.org ~ TaxFoundation.org ~ HomelessNation.org ~ Gotham Wins One Against The Homeless Industry ~ Native Americans in the US ~ Causes of Mental Disorders ~ Homelessness of Jesus ~ McKinney-Vento Homeless Assistance Act ~ Mitch Snyder ~ Quora: Why Do Homeless Prefer To Stay On The Streets Instead Of A Shelter? ~ Homelessness And The Digital Divide
(Home)  © Sitemap ©  (Links)
About ~ Above All Names ~ anti-Messiahs ~ Bibliolatry ~ Car Cult ~ Darkness ~ Enculturation ~ Judging ~ Labor ~ Law ~ Law lords ~ Love ~ Mammon ~ Monetizers ~ Oracle ~ Prayer ~ Q-Source ~ Quotes ~ Spiritual ~ Tekton ~ Temple ~ The Way ~ The World ~ What We Do
Mammon-free zone: No ads, tracking or purchases: No offerings accepted
Ego-free zone: No names or personalities exhibited: No praises accepted
Back To Top
(uBlock Origin Extension = No Ads) 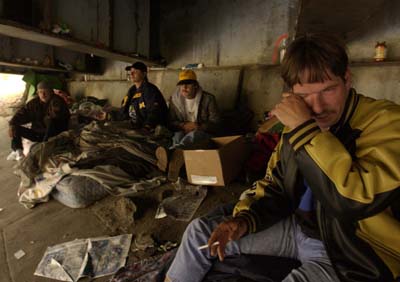